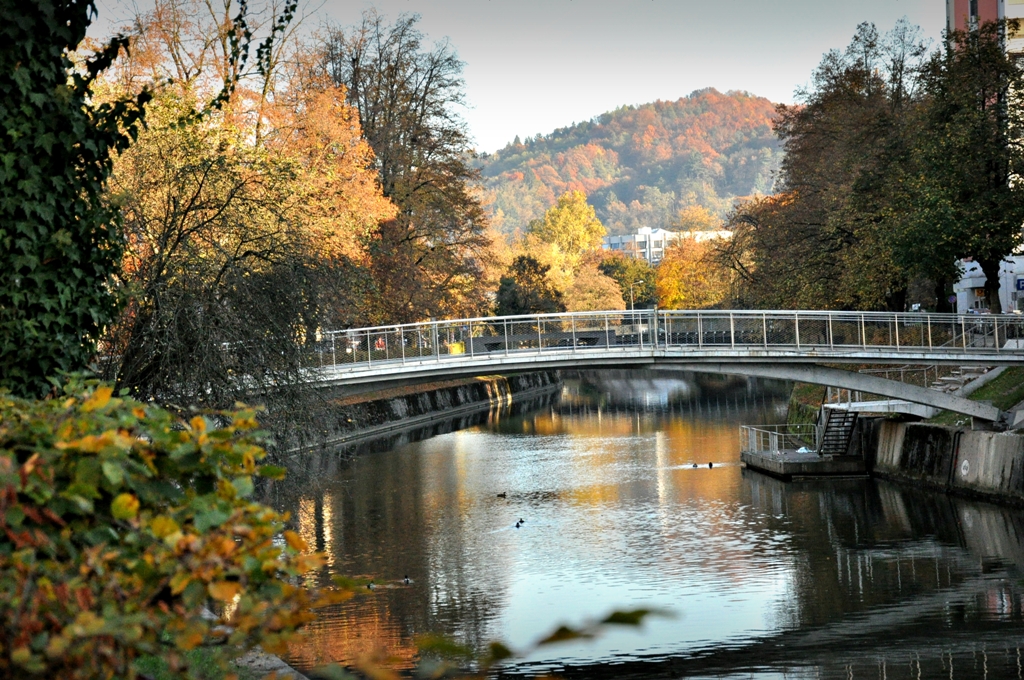 There is no direct bus going to Ljubljana from Dubrovnik Croatia, you need to go to Zagreb and catch a bus from there. Here’s how I did it: I took the 6:30pm bus to Zagreb which is ten to eleven hours travel time. The bus arrived in Zagreb around 5:00am From there you need to buy another ticket going to Ljubljana that will reach around eight in the morning.

After thirty minutes of leaving the bus station of Zagred, you will reach the border town of Bregana Croatia and Obrezje Slovenia,  the custom officers will ask you (tourists) from non European countries to go down and present your passport to the officials. They will put an exit and entry stamp to your passport. As long as you have the right documents or visa, everything will be okay. Overall travel time from Dubrovnik Croatia to Ljubljana Slovenia is  twelve to fourteen hours. Yes, that’s really a full night sleeping on the bus.

Ljubljana is the capital of Slovenia. This country is a crossroads of Germanic, Slavic and Mediterranean cultures. The Baroque architecture of buildings, modern statues, old town, cafes and restaurants that offers International, Asian, Mediterranean and Turkish cuisines makes Ljubjlana one of the places where you want to be right now. It is a small city, very easy to get around. Exploring on foot is the best way to see the beautiful Ljubjlana. Here’s some of the things you need to see and to add on your to do list:

Church of the Heart of Jesus

From the hostel, which is located in the famous hippie street of Metelkova Ulica, I walked through the picturesque streets of Ljublana. This is the best way to see more of the architectural sites. On my way, I noticed the red brick Church of the Heart of Jesus constructed from 1881 to 1883 by famous architect Adolf Wagner.

If you are a party goer, this is the place where you should stay. It is near to Metelkova hippie street, there are clubs and bars around, hostels, restaurants, tattoo shop, gallery of paintings, liquor shops and all kinds of exotic items. Everything you need is here and it is few blocks from the central market.

Dragon Bridge is one of the iconic landmark of Ljubjlana. The bridge is adorned by Dragon statues and the lamp posts with smaller dragons. This bridge was built during the 19th Century. The 1848-1888 years written on the bridge, is to commemorate Franz Joseph 1 forty years of his rule. The Dragon statues are based on the legend of Jason The Argonauts who said to be the founder of Ljubljana and have killed the dragon. You can’t claim that you have visited Ljubljana if you don’t have a photograph of yourself with the Dragons of the Dragon Bridge.

Grab something to eat at the open kitchen next to the St. Nicholas Cathedral or buy something from the market. Leather goods, coats and jackets, fruits and vegetables. There are plenty of dishes to choose from. At night, this open kitchen is livelier, packed with locals and tourists. A meal for one ranges from 4.50€ to 7.00€.

You are lucky if you happen to be there during chocolate market. This is a good bring home for holiday season, as gifts to friends and love ones. Everyday, is a different sort of things they sell. Some days will all be handicrafts, paintings, and handmade jewelries. Other days, will all be wine and cheese.

The orange pink colored church is the Franciscan Church located in Preseren Square. The Franciscan church was built on the 16th century with a Baroque architecture. You can check more about the church and the mass schedule here.

Preseren Square is part of the old town and serves as a meeting place, venue for concerts, festivals, carnivals, and political protests. It is where you can find the statute of Slovene national poet Franz Preseren and the Triple bridge.

The Triple bridge or the Old bridge is a very unusual type of bridges. It connects the Old and the New town of Ljubljana. The first bridge was constructed on the 12th century, suffered a great damaged and been restored on the 18th century which another bridge has been added. It was until the 19th century that triple Bridge got its final name.

Cobbler’s bridge got its name due to this bridge served as space for cobblers workshops. Built by architect Jose Plecnik on the 19th century.

You can see this St. James Bridge from Cobbler’s Bridge. The present bridge was built on the 19th century, located on the southern end of the Ljublana.  Nowadays, this serves as the main crossing point of all vehicles.

Also known as the Chapel of St. Francis Xavier built on the 16th century and was transformed into the Baroque style in 17th century by architect Francesco Ferrata. The exterior was designed by architect Raimund Jeblinger. To read more about the church, click here.

On the day that I arrive in Ljubljana, I tried to book a tour going to Lake Bled, but that time, there was a marathon around the city, so travel agencies said that day trip to Lake Bled will be available after a week. Well, maybe some other time.

More things to see in Ljubljana such as the castle, fountains and bridges on my next post.

6 thoughts on “Walking around Ljubljana”

Site Title
Eye For A Pic

Welcome to Dorothy Bruce’s take on her world

If home is where the heart is, my heart is in Serbia.

A book on one hand, boarding passes on the other.

"Travelling- it leaves you speechless, then turns you into a storyteller" - Ibn Battuta

Create Your Own Happiness

Gone On A Wander

Sometimes those who wander are in fact lost...

Writings from the Cargo Class